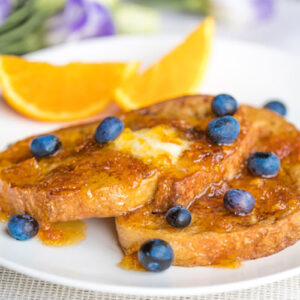 Look no further than this French Toast with Orange Marmalade Syrup and Blueberries for your Easter brunch/lunch/breakfast. Or hold on to this recipe and save it for Mother's Day, because we guarantee any mom would feel lucky enough to have this delicious concoction for breakfast! A dense bread that is not too hard or too soft is the best choice for this recipe, or day-old bread works just as well.
Servings 4
Print Recipe Pin Recipe